The default mode network is most commonly shown to be active when a person is not focused on the outside world and the brain is at wakeful rest, such as during daydreaming and mind-wandering. But it is also active when the individual is thinking about others, thinking about themselves, remembering the past, and planning for the future. The network activates "by default" when a person is not involved in a task. Though the DMN was originally noticed to be deactivated in certain goal-oriented tasks and is sometimes referred to as the task-negative network, it can be active in other goal-oriented tasks such as social working memory or autobiographical tasks. The DMN has been shown to be negatively correlated with other networks in the brain such as attention networks.

The default mode network is known to be involved in many seemingly different functions. It is the neurological basis for the self:

Remembering the past and thinking about the future:

Studies have shown that when people watch a movie, listen to a story, or read a story, their DMNs are highly correlated with each other. DMNs are not correlated if the stories are scrambled or are in a language the person does not understand, suggesting that the network is highly involved in the comprehension and the subsequent memory formation of that story. The DMN is shown to even be correlated if the same story is presented to different people in different languages, further suggesting the DMN is truly involved in the comprehension aspect of the story and not the auditory or language aspect.

The default mode network has shown to deactivate during external goal-oriented tasks such as visual attention or cognitive working memory tasks, thus leading some researchers to label the network as the task-negative network. However, when the tasks are external goal-oriented tasks that are known to be a role of the DMN, such as social working memory or an autobiographical task, the DMN is positively activated with the task and correlates with other networks such as the network involved in executive function.

A hitherto unsuspected possibility is that the default network is activated by the immobilization inherent in the testing procedure (the patient is strapped supine on a stretcher and inserted by a narrow tunnel into a massive metallic structure). This procedure creates a sense of entrapment and, not surprisingly, the most commonly reported side-effect is claustrophobia. This alternative view is suggested by a recent article that links theory of mind to immobilization.[14] 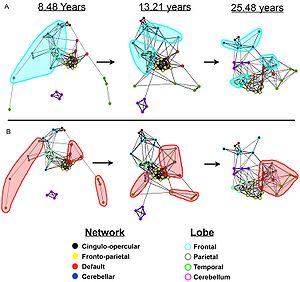 Graphs of the dynamic development of correlations between brain networks. (A) In children the regions are largely local and are organized by their physical location; the frontal regions are highlighted in light blue. (B) In adults the networks become highly correlated despite their physical distance; the default network is highlighted in light red.[15]

The default mode network is an interconnected and anatomically defined[3] set of brain regions. The network can be separated into hubs and subsections:

**Functional hubs:**[16] Information regarding the self

**Dorsal medial subsystem:**[16] Thinking about others

The default mode network is most commonly defined with resting state data by putting a seed in the posterior cingulate cortex and examining which other brain areas most correlate with this area.[17] The DMN can also be defined by the areas deactivated during external directed tasks compared to rest.[18]

Function connectivity analysis in monkeys shows a similar network of regions to the default mode network seen in humans.[3] The PCC is also a key hub in monkeys; however, the mPFC is smaller and less well connected to other brain regions, largely because human's mPFC is much larger and well developed.[3]

Diffusion MRI imaging shows white matter tracts connecting different areas of the DMN together.[8] The structural connections found from diffusion MRI imaging and the functional correlations from resting state fMRI show the highest level of overlap and agreement within the DMN areas.[1] This provides evidence that neurons in the DMN regions are linked to each other through large tracts of axons and this causes activity in these areas to be correlated with one another.

The default mode network has been hypothesized to be relevant to disorders including Alzheimer's disease, autism, schizophrenia, depression, chronic pain and others.[3]

People with Alzheimer's disease show a reduction in glucose (energy use) within the areas of the default mode network.[3] These reductions start off as slight decreases in mild patients and continue to large reductions in severe patients. Surprisingly, disruptions in the DMN begin even before individuals show signs of Alzheimer's disease.[3] Plots of amyloid-beta, which is thought to cause Alzheimer's disease, show the buildup of the protein is within the DMN.[3] This prompted Randy Buckner and colleagues to propose the high metabolic rate from continuous activation of DMN causes more amyloid-beta protein to accumulate in these DMN areas.[3] These amyloid-beta proteins disrupt the DMN and because the DMN is heavily involved in memory formation and retrieval, this disruption leads to the symptoms of Alzheimer's disease.

DMN is thought to be disrupted in individuals with autism spectrum disorder.[3][19] These individual are impaired in social interaction and communication which are tasks central to this network. Studies have shown worse connections between areas of the DMN in individuals with autism, especially between the mPFC (involved in thinking about the self and others) and the PCC (the central core of the DMN).[20][21] The more severe the autism, the less connected these areas are to each other.[20][21] It is not clear if this is a cause or a result of autism.

Lower connectivity between brain regions was found across the default network in people who have experienced long term trauma, such as childhood abuse or neglect, and is associated with dysfunctional attachment patterns. Among people experiencing posttraumatic stress disorder, lower activation was found in the posterior cingulate gyrus compared to controls.[22] Hyperconnectivity of the default network has been linked to rumination in depression[23] and chronic pain.[24] If the default mode network is altered, this can change the way one perceives events and their social and moral reasoning. Thus, making a person more susceptible to major depressive-like symptoms.[25]

The default mode network (DMN) may be modulated by the following interventions and processes:

Hans Berger, the inventor of the electroencephalogram, was the first to propose the idea that the brain is constantly busy. In a series of papers published in 1929 he showed that the electrical oscillations detected by his device do not cease even when the subject is at rest. However, his ideas were not taken seriously, and a general perception formed among neurologists that only when a focused activity is performed does the brain (or a part of the brain) become active.[36] In the 1950s, to the surprise of the researchers, Louis Sokoloff and his colleagues noticed metabolism in the brain stayed the same when a person went from a resting state to performing effortful math problems suggesting active metabolism in the brain must also be happening during rest.[3] In the 1970s, Ingvar and colleagues observed blood flow in the front part of the brain became the highest when a person is at rest.[3] Around the same time, intrinsic oscillatory behavior in vertebrate neurons was observed in cerebellar Purkinje cells, inferior olivary nucleus and thalamus.[37]

In the 1990s, with the advent of positron emission tomography (PET) scans, researchers began to notice that when a person is involved in perception, language, and attention tasks the same brain areas become less active compared to passive rest, and labeled these areas as becoming "deactivated".[3] Later, experiments by neurologist Marcus E. Raichle's lab at Washington University School of Medicine and other groups showed that the brain's energy consumption is increased by less than 5% of its baseline energy consumption while performing a focused mental task. These experiments showed that the brain is constantly active with a high level of activity even when the person is not engaged in focused mental work. Research thereafter focused on finding the regions responsible for this constant background activity level.[36]

Raichle coined the term "default mode" in 2001 to describe resting state brain function;[18] the concept rapidly became a central theme in neuroscience.[38] Around this time the idea was implanted that this network of brain areas is involved in internally directed thoughts and is suspended during specific goal-directed behaviors. In 2003, Greicius and colleagues examined resting state fMRI scans and looked at how correlated different sections in the brain are to each other and found the correlation maps showed the same areas Raichle found active during rest and that others found to deactivated.[17] It was important because it demonstrated a convergence of methods all lead to the same areas being involved in the DMN. Since then other resting state networks (RSNs) have been found, such as visual, auditory, and attention networks, some of them are often anti-correlated with the default mode network.[7]

The number of publication per year with "default mode network" or "default network" in the title. Searches were done in Google Scholar.

In the beginning to mid 2000s, researches labeled the default mode network as the task negative network[5] because it was deactivated when participants had to perform tasks. DMN was thought to only be active during passive rest and then turned off during externally focused goal-directed tasks. However, studies have demonstrated the DMN to be active in external goal-directed tasks which is known to involve the DMN such as social working memory or autobiographical tasks.[6]

Around 2007, the number of papers referencing the default mode network have skyrocketed.[8] All years prior to 2007, there were 12 papers published that referenced "default mode network" or "default network" in the title, however, between 2007 and 2014 there were 1384 papers published. One reason for the increase in papers is a result of the robust effect of finding the DMN with resting state scans. Another reason is the DMN can be measured with a short and effortless resting state scans meaning they can be performed on any population including young children, clinical populations, and nonhuman primates.[3] A third reason is role of the DMN has been expanded to more than just a passive brain network.

Some have argued the brain areas in the default mode network only show up together because of the vascular coupling of large arteries and veins in the brain near these areas, not because these areas are actually functionally connected to each other. Support for this argument comes from studies that show changing in breathing alters oxygen levels in the blood which in turn affects DMN the most.[3] These studies however do not explain why the DMN can also be identified using PET scans by measuring glucose metabolism which is independent of vascular coupling[3] or in electrocorticography studies[39] measuring electrical activity on the surface the brain.

The idea of a "default network" is not universally accepted.[40] In 2007 the concept of the default mode was criticized as not being useful for understanding brain function, on the grounds that a simpler hypothesis is that a resting brain actually does more processing than a brain doing certain "demanding" tasks, and that there is no special significance to the intrinsic activity of the resting brain.[41]