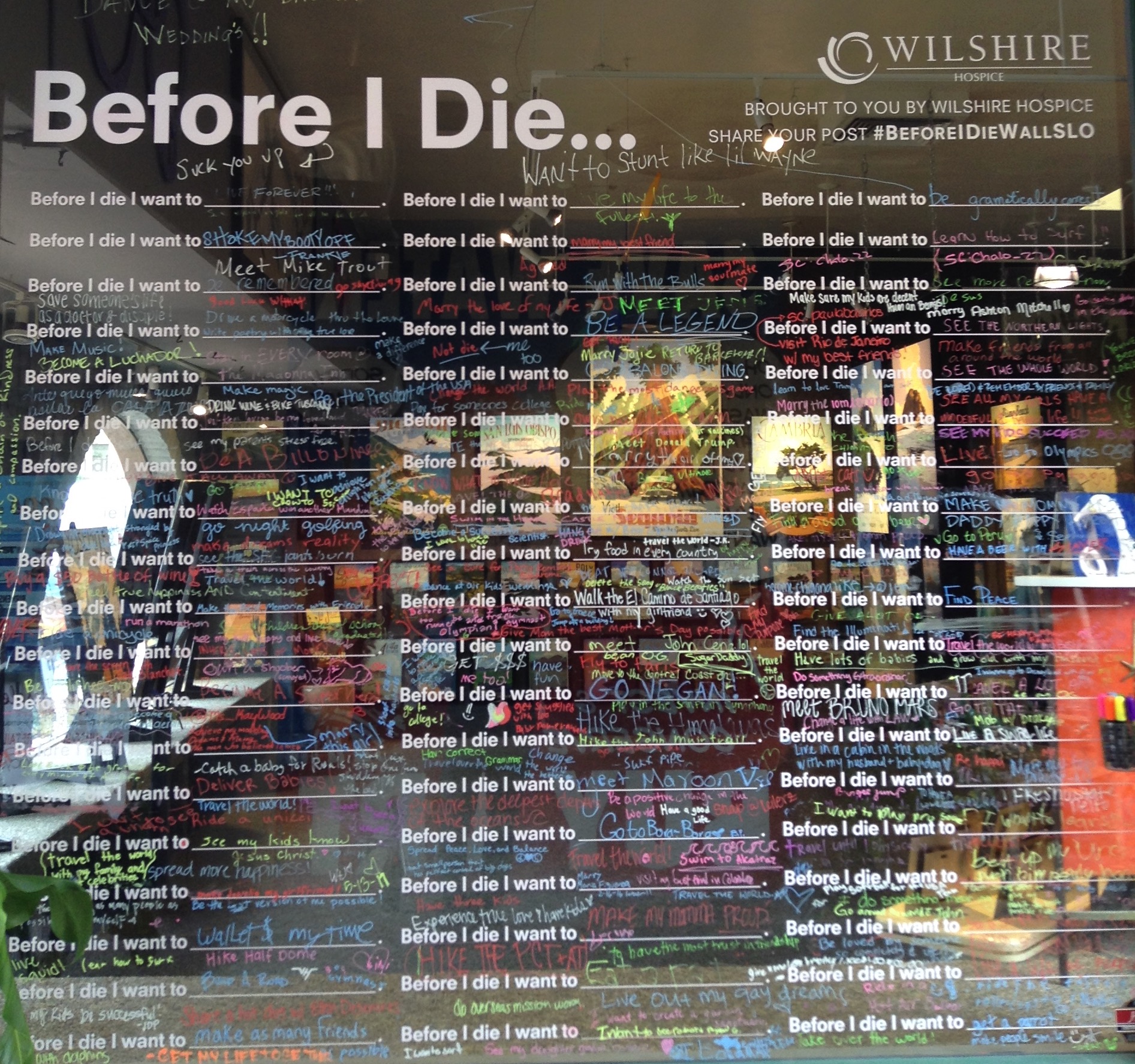 BFID = Before I die
NTL = Never too late

The world we knew won't come back, the time we've spent we'll never get back, the life once known is gone before we know it.

Wanting what we don't have is where the conflict begins.

There is tension between the done and the undone.

Between the start & the finish, tension resides until the gap is gone.

Even when life seems to be problem free, there's an ever-present weight tied to what is not present in it. The more we have, the more we take for granted, and the more we turn our attention to what's missing.

There is a growing phenomenon called FOMO - Fear of Missing Out. It reflects the 'buyers remorse' feeling we get when second guess our decision. The more significant or irreversible a decision, the more paralyzing it can feel.

Because we live in such a prosperous era, we believe we can have our cake and eat it too. In fact, we see evidence of it every day.

Never before have we had so many choices. From the moment we awake, the number of decisions we must make each day is relentless. We live in fear that we won't make the best decision. As small as the decision as to what to order for lunch, that we could have had something better. Because every decision has a tradeoff.

The reality is that there are tradeoffs and unpredictable outcomes involved in every decision we made.

When you consider the infinite number of potential outcomes that could arise as a result of making a decision, it's no surprise we suffer paralysis when we must make a decision.

In 13 Reasons Why, Clay Jensen is hit with excruciating guilt when he sees that a single decision resulted in devastating outcomes. However, in reality, all we control is our effort, not the result. We are the cause, but the effect is rarely up to us.

This causes a great deal of suffering.

In any given moment, you can only have one true point of awareness. Whatever your attention is on, there's a conflict to everything else demanding your attention in that same moment that's not in your field of view.

There is tension between life and death.

The tradeoff of the decision to die is a decision to live. You could even make a pros & cons list and it may be pretty even (or god forbid, weighed heavier on the death side).

At some point in our life, the argument for death will win out.

I recently start contemplating a BFID (Before I Die) list.

I started to make a long list of places to visit, people to meet, concerts to see, books to read, etc...

Like in the movie Bucketlist, to do them all would require a wealthy sponsor and lots of free time. The space between where I was and where I wanted to be loomed large. I began to consider the tradeoffs I'd have to make and the sacrifices to make even half of them a reality. Would there be enough time to do them all? Not likely.

The weight of tension between here and there was growing heavier by the minute.

The BFID list was filled with want I wanted, not what I needed.

Then I asked myself, what is the one thing I need BFID?

What's the one true BFID that drives all the other meaningful ASAPs in my life?

I define peace as 'being free of tension.'

If peace is the absence of tension, then to achieve it, all I needed to do was release the desire to need anything I didn't already have. Releasing the desire to be anywhere other than where I am right now.

It occurred to me that death may be the ultimate peace. So for this reason, I no longer fear death. Instead, I fear an attachment to wanting what I'll never get in life.

I realized this isn't asking much from life. I realized that all the striving was not helping me find the one thing I actually needed.

I discovered that many of conflicting priorities were the result of chasing wants, not needs.

Both money and time are man-made metrics. We can live from one of two perspectives:

Life itself is here to serve what you need from it. It does not exist to provide what you want from it.

Life will never ask for more than you can handle, nor should you expect life to give more than it can provide.

I see that life, to the extent that it's keeping death at a distance, is doing it's job. It's beating death every moment I continue to breathe.

To deny life, exactly as it's been given, exactly how it exists, is a failure to acknowledge the gift of our own existence.

You should want live longer because you've made it this far already. Are the worst of times ahead or will they be the best ones yet? Perhaps a daily dose of optimism the only prescription you need.

If life feels heavy, discover the one thing you truly need and let go of everything else. You've held the key to all along.